Time in Ghana has a different rhythm than in Europe. This can be experienced in the late-afternoon reverie, when the air gradually cools down as a result of blowing harmattan - a dry wind from the Sahara, bringing dust that covers the surrounding world. 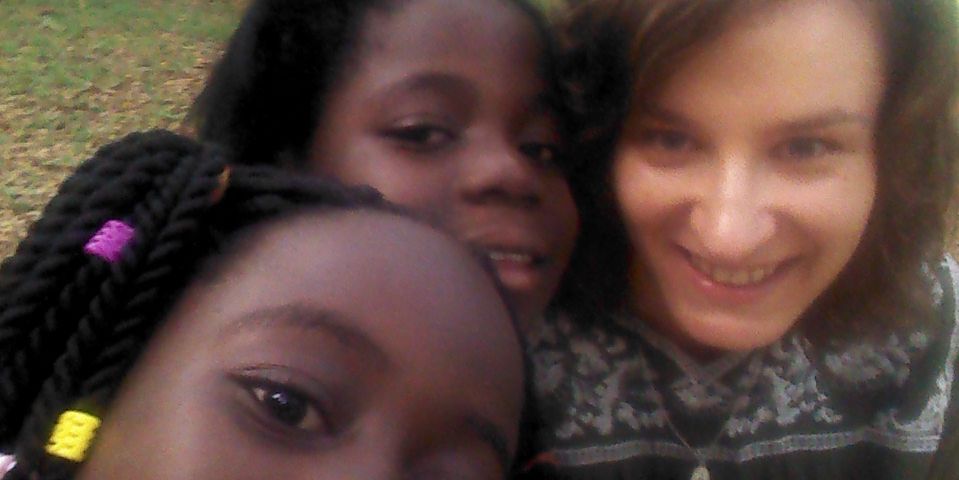 Temperature differences are more pronounced at this time of year, especially in Kwahu Tafo, as this place is located in the mountains. Thanks to the kindness of Sister Dorota Sojka SSpS, I was able to visit a small clinic where the Sisters work and get to know the community and the parish.

I live on a daily basis in the capital, Accra, where hot and humid air accompanies me almost every day, just like street noise and music. The pace of life is also faster here than in other smaller towns.
Ghana, like in nature and seasons, combines many contrasts. As a lay missionary, I experience many contradictions here. From the first days of my stay I was struck by the openness and cordiality of the Ghanaians. Their attitude focussed on the person, to be more than to have.

I will remember for a long time the first Holy Mass in the local church dedicated to God's Mercy. The faithful come together from the very early hours of the morning to worship God, start the day with Him, entrusting Him with hardships, work and all upcoming events.
The openness of hearts, the lack of concern only for their own good causes that a sense of community is visible, the norm is mutual greeting, small talks after Holy Mass.
I remember that when I saw the great statue of Merciful Jesus and I realized how vivid is the cult of Divine Mercy, I felt that despite the distance, in fact everywhere wherever I am, is my home - if I go there with Jesus and keep him firmly. I did not expect God in his goodness and generosity to answer the desires of my heart so generously.

Already on the spot, it turned out that in missionary work, I would be able to develop my passion and apply the knowledge so far acquired as a psychologist at school.
I meet children and young people from different social backgrounds and environments. To my surprise, despite the apparent differences, both those attending a Catholic school and street children most need simply acceptance and interest. In fact, it is important to spread love and skillful displaying it, and to see the value of each of my pupils as an individual, not as a "street child" or "a child from a good home".
As a psychologist, I try to recognize the uniqueness of the gift that God has offered to the world in each of these people and to make them aware of the value of their lives.

This is not an easy task. As a "obruni" meaning a white man from a local language, I arouse a lot of interest.
But will I be able to understand a little boy's problems, for which the center is the only place where he can safely go to sleep, after he was abandoned by his parents coming from Togo, and the theft became a way of life when he was alone in a foreign country?
Can a young girl trust me after being hurt by adults in childhood, and now being a teenager, she has a serious problem with drugs?
Most of these children do not know the world that we take for granted and therefore we must earn their respect and trust, and in my case overcome the cultural and linguistic barrier.
They need encouragement, praise, recognition of their talent and abilities. Some of them can make beautiful decorations, craftwork, others are talented cooks or hairdressers.
Just the same as children learning at school, for whom parents often do not have time and can not talk about difficulties and experiences, they need to be valued and listened to.

Another contrast in Ghana is for me a deeply rooted religiosity, spirituality, almost omnipresent and imposing. On shop windows, cars, links to God, quotes from the Holy Bible. Names of enterprises taken from the Bible, religious motifs on dresses, shirts, jewelry.
Also in everyday speech, the words "God bless you", "thank God", "God's will" are on the agenda. It was all surprising and difficult to understand because it did not fit the image I knew.
On the other hand, you can often find several churches, various sects, even on one street. There is a widespread belief in magic and healers, and often millions of dollars are spent to take advantage of their "healing" power.
The Catholic Church is young here, for example, the first Sisters Servants of the Holy Spirit came to Ghana in 1946. Feeling strongly freshness, authenticity of faith, which also results from culture, such as the aforementioned references to God in everyday life.

It was a big challenge for me to face the death of a priest who came to the hospital for treatment in Accra. He died after a few months of therapy.
I experienced a shock experiencing such a different approach to death than I knew. The reaction to his departure in my surroundings was devoid of despair, dramatization. Death is definitely not taboo. It is a natural turn of things, something that will happen to every human being.
Initially, I perceived it as a lack of sensitivity, indifference which caused rebellion in me. But when strong emotions subsided, I understood how much I can still learn.

All you need to do is watch carefully, because God speaks through everyday events, people and situations wherever we are. I wish all readers not to be people who "look with their eyes and do not see, listen to their ears and do not understand".